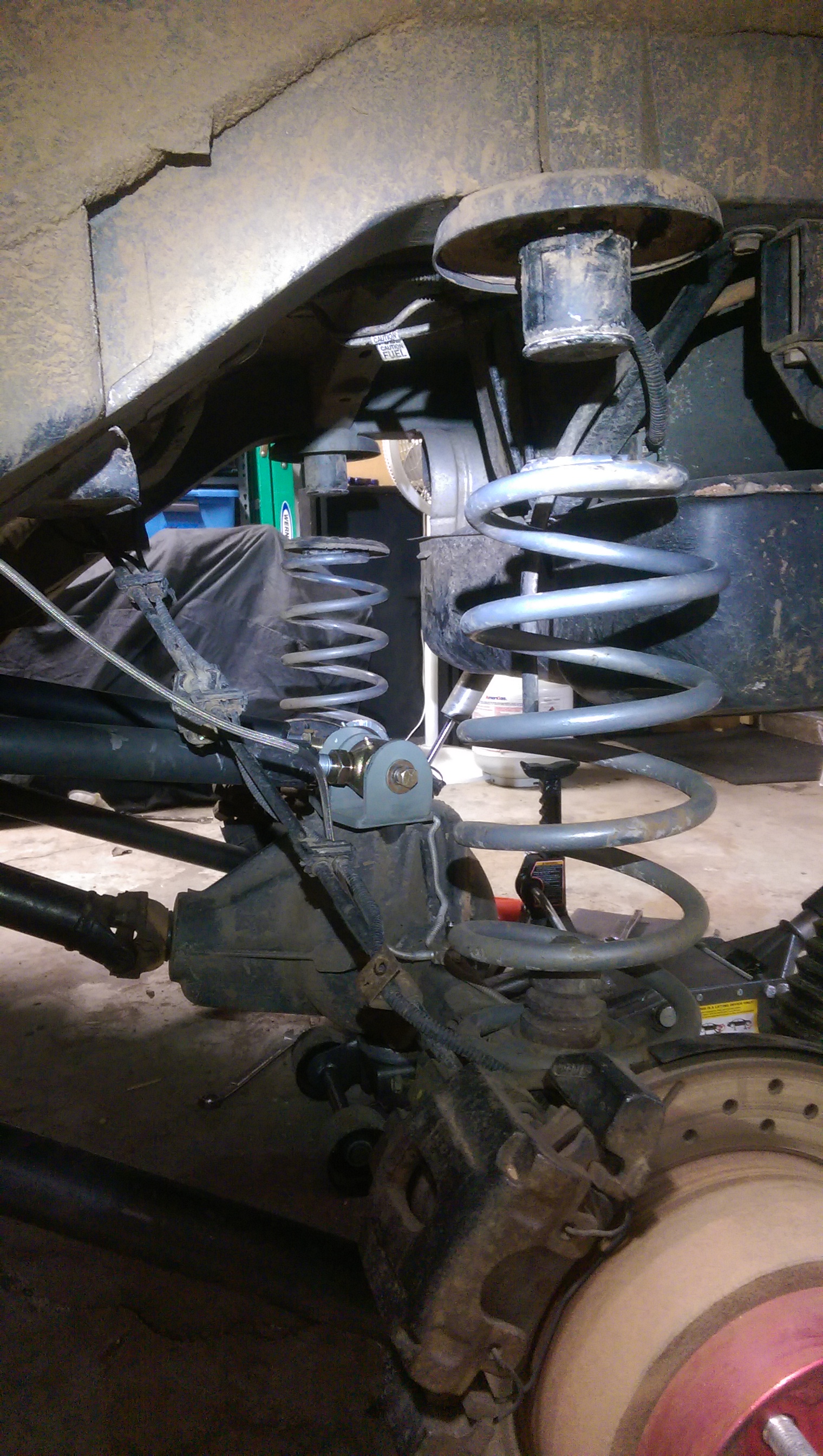 I built a 4 link rear suspension for my Jeep Grand Cherokee.  To some, that’s not impressive at all.  To others, it’s a really big deal.  I’m of the mind that it’s a pretty big deal.  There was a lot of math, measurements, and SO MANY STEPS, (not to mention that it’s definitely a critical system) that it may be my most proud accomplishment in the automotive world to date.  And if I say so myself, it turned out good.  Like, really good.  I made some mistakes along the way, and I’ll share those of course.  But before we get started, let’s talk about what a 4 link is, and why I chose it. 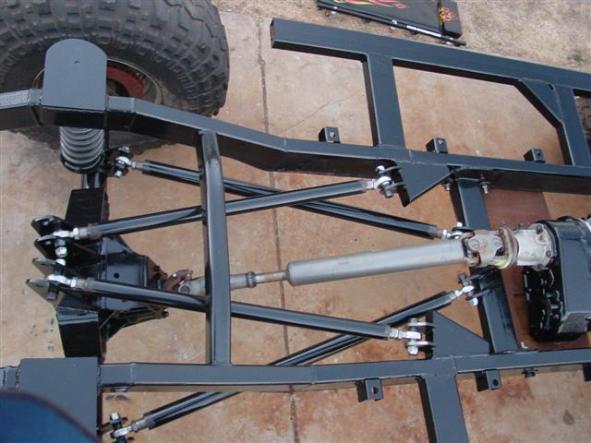 There are a TON of rear suspension options out there.  I encourage you to do your own research here, because there is SO much about suspension online and I’m simply not smart enough to sort through it all to figure out what info is best to put here… Maybe I’ll do a post about them all sometime.

For our purposes, we’ll narrow it down to off road suspensions, and even further to coil sprung suspension.  For off road vehicles, these are probably the most common rear setups we see..

The 1996-up Jeep Wrangler uses a linked suspension, with some variation or another.  It’s very popular, but there is a major downside.

DEATH WOBBLE – I’m totally gonna write a piece on death wobble one day, but today is not that day.  Suffice it to say that death wobble is an oscillation in the front suspension and steering system that is so violent, it will literally rip the steering wheel from your hands.  It’s usually caused by loose and/or worn components in the steering (or front suspension) and is set off by a bumping or jarring motion, like a pothole…  The good news however, is that death wobble (by its true definition) exists only on vehicles with a solid axle up front, and typically only happens at freeway speeds (jeep owners know this as “top speed”).  So that limits us to only almost all Jeeps, old Dodge, old Chevrolet, old Ford, and only a couple dozen more types of vehicle…

Quick fun story.  I was explaining death wobble to my Dad one day, when he dropped a hell of an overly-manly-man on me.  Back in the day when he was building sleds (50’s sedans that are lowered and whatnot), they were still solid front axle (2wd type solid axle) and were susceptible to death wobble.  They called it simply, “a shimmy”…

To begin with, I decided to replace the upper control arm triangle that came with my Rough Country lift with individual upper links.  In theory, this would allow the rear axle more articulation, and will accommodate a wider range of configurations as I nail down how I want the Jeep to ultimately sit (tire size, spring size, etc…).  You could say it was simply incidental that the end game was a 4 link.  The truth is though, it was simply easier than attempting any other setup.  Lots of pieces fell into place all on their own in this project, and the 4 link was simply a perfect, natural progression for this vehicle.

I decided to build a “triangulated 4-link”  which means that two of the links will meet in the middle at the top of the diff, to make a triangle shape.  This triangle shape on the upper links will prevent the axle from moving side to side under the Jeep, and eliminates the need for a track bar in the back.  I chose this for several reasons: 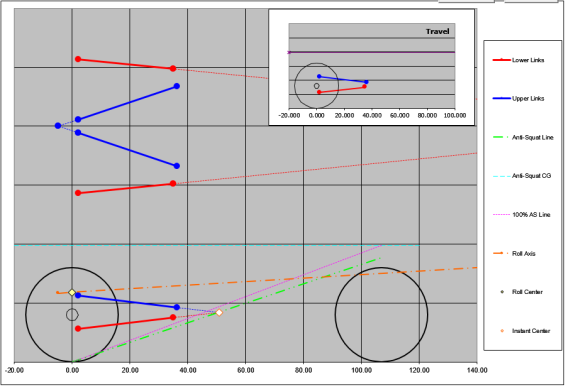 My virtual 4 link.  Thanks to Dan Barcroft from the Internet for the calculator.

I began, simply enough, by purchasing a pre-made differential bracket made by Clayton.  By bolting this to the differential, I was able to have a trustworthy starting point from which to take all my measurements for the upper links.  Though this wasn’t necessary, and could have been made at home, it saved me a few hours of labor on what became a time crunched project..

This bracket was the idea that started it all.  And it saved hours of design time.

Shipped it all the way from PA in just a few days, only for it to sit on my shelf for six months.  Thanks all the same bud!

I spent a little while under a buddy’s WJ, which happened to have the Clayton 6″ lift on it, so I actually had a great reference during the project.  After looking and measuring for a while, I decided that my best bet would be to pretty much copy exactly what they did. 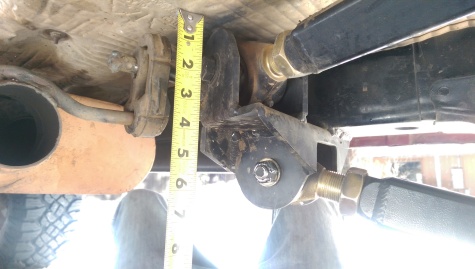 The next thing to do was to replace the rubber (clevite) bushings in the RC lower links with real deal Currie Johnny Joints.  This was optional, and should be pondered for a spell if you’re working on a daily driver.  The clevite soaks up a LOT of the bumps in the road.  Having Johnny Joints on all of the suspension will make you feel every bump in the road.  Consider yourself informed… 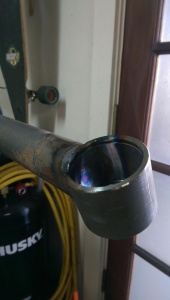 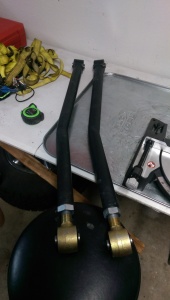 The upper links play several roles in supporting the rear suspension.  They’re the easiest to change to adjust your pinion (Differential/Driveshaft) angle, In my and other triangulated 4 link setups, they keep the axle lined up laterally to the vehicle, they’re often (combined with other things) what determine your anti-squat and roll axis.  All of these variables have to be taken into account when locating the links, hence the calculator above.  You can find it here.

With all of that out of the way, I started collecting materials:

Here, I used a 2″ tow hitch ball (which, perfectly, had 1″-14 threads) as an anvil to hammer the inserts into the DOM tubing.  Once there was approximately 1/4″ of insert left out (as above)  I welded it all up.  Then paint, and install the new Johnny Joints. 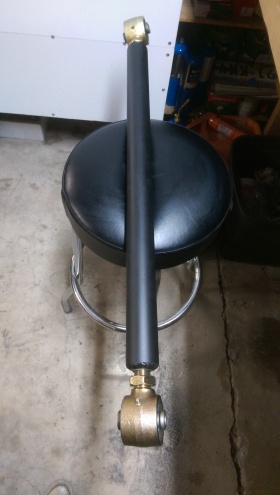 Next up:  The Bracketry.

I’ll be honest.  I straight up copied Clayton here (Thanks Clayton!).  But it just ended up working so well with what I had, I’m certain I would have done the same thing even if I didn’t have the reference rig.

I ground the paint off of the brackets that are currently installed on my Jeep that keep the rear lower links in place.  I just tacked some plate on it, and then cut and welded in some gussets.  Then I pulled it apart, took it back to the bench and finished out the weld. 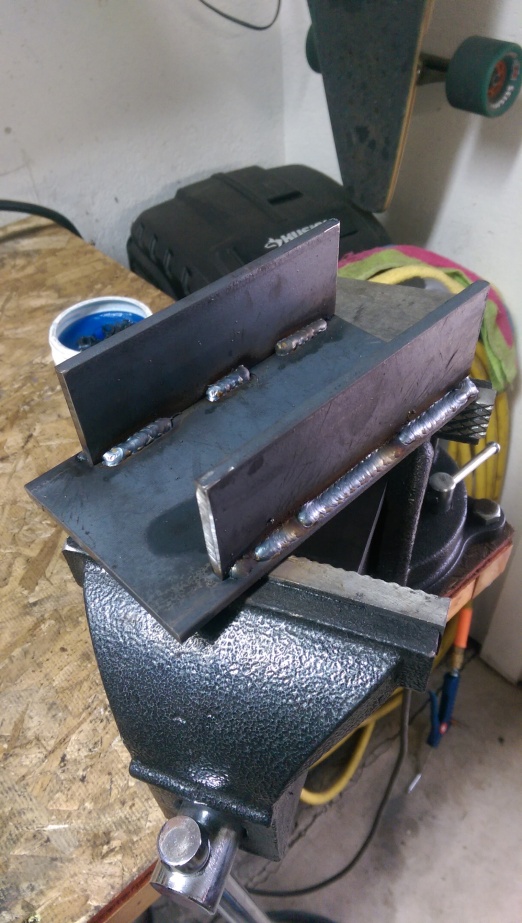 This is the plate and the gussets all welded up.  A full bead on the outside (for looks) and three 1-1.5″ beads on the inside.

You can see where I had to start over a couple times above.  I don’t have a dedicated circuit breaker for the welder yet, and 1/4″ is the max my welder can handle.  This combination meant that I had to stop and start several times through the process.  Future garage upgrade!

This is why you need gas when MIG welding.  It causes bubbles.  This was my first pass of the day, and I just hit the power switch and did work.  Not my best moment…

Instead of trying to math the entire project, I sometimes assembled things as I could, and let them naturally dictate where to get welded, like with the control arm above.  I bolted the tabs to the joint, set the arm to it’s intended length, and then tacked it up.  A couple minor alignments, and I’m confident that everything is aligned down to the thousandth.  Saved me hours of time, and my brain from doing a lot of math.

Here’s a fully completed bracket (passenger side, I think).  I like this picture because it shows what I made, and what it came from.  Before I got a hold of it, this was just bare flatbar.  Now it’s part of my Jeep.  Shit’s dope, yo.

With the brackets welded up, they were tacked back into the Jeep again, but for the last time.  After getting them aligned and tacked in place, I seam welded them to the Jeep for forever.  Not the prettiest welds, but they’ll be strong, and that’s the important part. 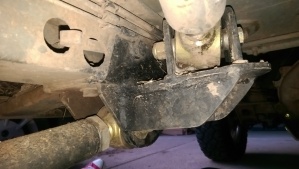 Once that was done, it was a fairly typical affair of bolting everything back together, then tightening the control arms down once the jeep was sitting on tires again.

I still have a few things that need to get done before I call this project complete, but none of them are affecting driveability, so I’ll get to them when I can.  Here’s the list, as much to help me remember, as it is for your entertainment.

So droop! Much wow!

Remember when I said I screwed up a few times?  Well, scroll back up to those pictures of my “reference rig”.  The ones with the measuring tape.  See how it has a short exhaust to make room for the 4 link?  Yeah, I completely forgot about this necessary step until I was literally welding things into the jeep.  I don’t know how I worked around that muffler for two days without remembering it…  At any rate, a buddy of mine came through with a clutch 40 series Flowmaster, which he most awesomely donated to the project that very night (my life is dope and I have dope friends).  I expected it to sound awful.  It doesn’t.  Remember when I said my life is dope?  That muffler sounds perfect. 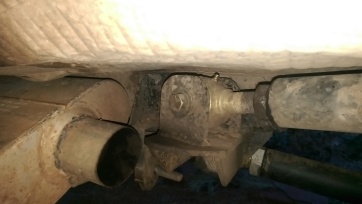 Other things I screwed up really well:

All in all, I’m really proud of the whole thing.  It was my first go at a project this ambitious, and it turned out baller AF.  I’m hoping to do a similar project for the front control arms some time this summer.

So how does the 4 link perform? 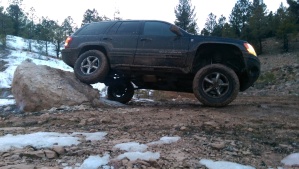 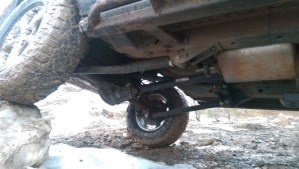