The off road club that I’m running with right now, NAU4x4, made a day trip to run Smasher Canyon in Cottonwood, AZ.  We did as much research as we could before the trip, but in the end we weren’t really sure what kind of trail we were in for.  Because of the unknown difficulty of the trail, we limited the trip to vehicles that were armored up and had at least a 33 inch tire (mine are only 32, but I’ve got quite a bit of armor underneath my Jeep, and I really had to use all of it, as you’ll see).

We started out the day with a quick run on Broken Arrow in Sedona to stretch the control arms and give some other folks an opportunity to go with us that may not have had the whole day to go wheeling. 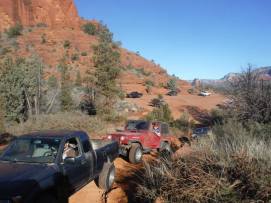 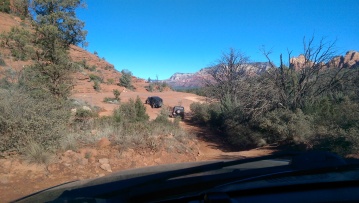 There’s really nothing special to report about Broken Arrow for those of us who know it. For those who haven’t heard of it, it’s probably the most popular trail in Sedona, AZ.   It’s rated difficult in the guide books, but it’s really just an easy, fun jaunt through the beautiful Sedona landscape.  A taste of Moab just a 30 minute drive away from home.

After that, it was back on 89a to head through Cottonwood to find Smasher Canyon.  When we got to the trailhead, it was time to air down the tires and disconnect the sway bars.  And then all we had to do was find the canyon itself. 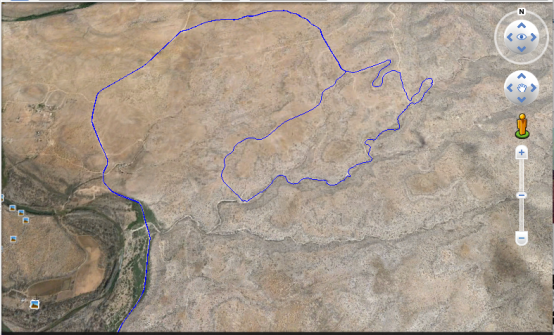 Eventually though, we found the sign we were looking for signaling the entrance to Smasher Canyon.  And I forgot to take a picture of it, but I have recreated an accurate digital representation of the sign using advanced computer technology:

Then it was time to do work.  The trail is nothing but river rock, boulders, and waterfall shelves the entire way, and it took us about 7 hours to make it the 2.5 miles through the trail.  It was truly gnar.  Admittedly, I was one of the slowest with the small tires and low clearance.  The vehicles on 35s were moving much faster.

Like I said, I made good use of the sliders.  And the transfer case skid.  And the diff skid..  And the wheels got some new scars too.

This YJ on 31 inch tires made it about half a mile into the trail, farther than most of us expected it to…  We parked it on top of this shelf and the driver rode with us for the rest of the trail. 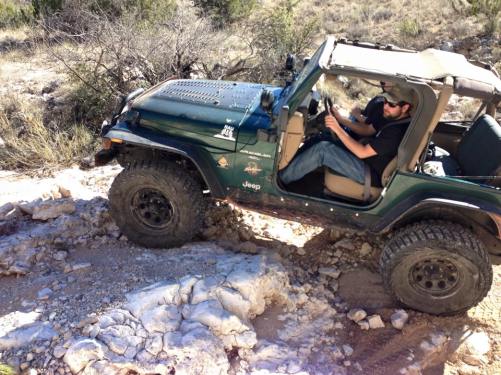 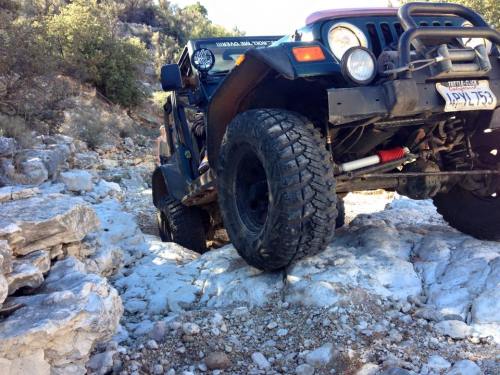 Our token TJ for the trip ran like a happy puppy all day.  There’s no dramatic shots of this rig, because it made everything just look so easy…  33s and open diffs. 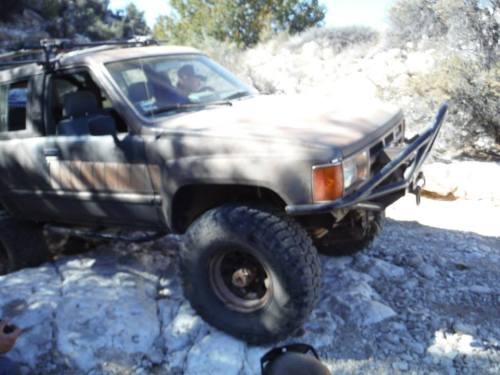 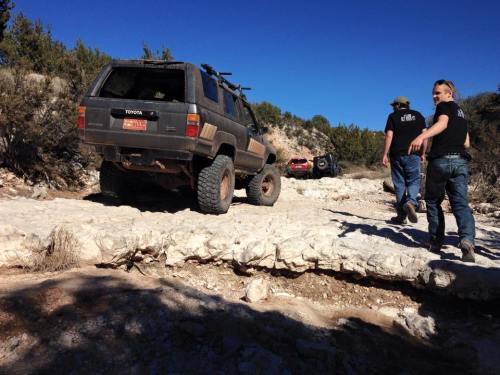 This 4Runner…  I’ll be honest here.  I expected we’d end up having to leave this leaf-sprung beast on 33s behind us with the YJ.  I was so, so wrong.  This damn thing just ate up every rock the trail could throw at it.  I suppose it just goes to show you what the right combination of skinny pedal and ball sack will get you.

This JK is on 35’s with lockers front and rear.  Wayalife forums said this was the minimum requirement to run this trail.  LOL…  Wayalife.  I’ll admit though, this thing ran the whole trail problem free (I don’t think it even ever hit the skid plates).  An awesome example of the difference that patient, controlled driving can make.

This Tacoma on 33’s went hard, but ended up snapping a CV shaft about halfway through the trail.  We changed vehicle order and he winched himself through the rest of the trail in 2wd.  It’s too bad we didn’t get more pictures of this truck in action. Pretty impressive performance if you ask me, from the driver and from the whole group for getting so organized so fast to get the truck moving again.  Damn good group of folks.  It took us about two hours to get the Taco unstuck from the ledge it was under and back in motion on the trail. 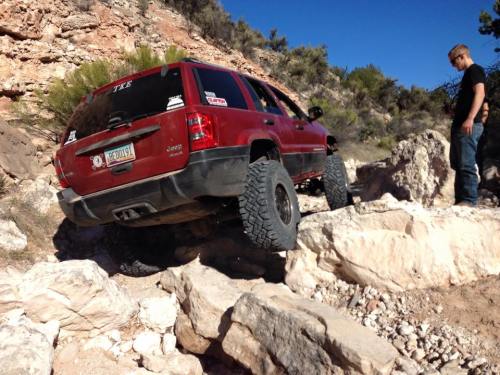 After getting the Tacoma unstuck, we were starting to run out of daylight, and we still had six vehicles to get off the trail.  Through obstacles like this, no less. 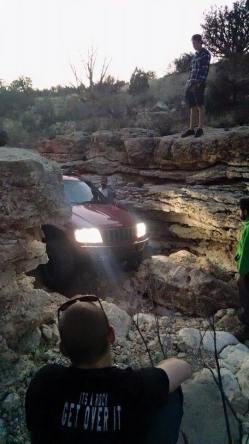 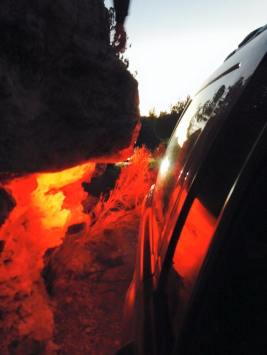 As those of us who have been on a trip like this know, pictures and video get less important as the day goes by.  We focus more on just getting out alive instead of recording the process.  There isn’t any evidence that I know of to show that my Jeep even made it through the obstacle above.  Alas, it’s more about the adventure than the pictures anyway.

At the end of this obstacle is a sharp right and then a 60 degree hillclimb that leads back out of the canyon.  However, if you continue straight past the hillclimb, you will find the truly hard-mode extension of Smasher Canyon, called Brutal Canyon.  It’s buggy territory as far as I’m concerned.  Some of us wanted to run it, and probably could have, but at 9pm, with a broken rig, and many hungry people, it just wasn’t able to happen.  We’ll see what happens next time we go back.  Maybe with 35’s and lockers…

After the dust settled and we were all aired back up, the total carnage was as follows:

I got a rare chance to flex my Hi-Lift while I changed my tire, which sprung a leak in the valve stem, probably while I was crushing it against a giant boulder.

Now I know how ladies feel at the gym…

For me, this was the right trail at the right time.  It was well outside the usual trail difficulty I run, and the Jeep handled it amazingly at a time when I didn’t have a lot of confidence in it’s reliability.  Not only did it handle it amazingly, but it was pretty well outside of what I thought my Jeep could handle too.  The new diff skid I made for it was perfect and saved my ass on many occasions.  And I had the Jeep all to myself the whole day.  That hasn’t happened in a long time, and it was nice to have nothing to do but just drive.

Can’t wait for you and Rudy to go on the next one though babe!!!

Here’s a video of us on the trail.

Oh yeah!  I almost forgot about the carnage pics!!!

Control arms, mounting brackets, rock sliders, and you can even see the exhaust hanger dangling down on the far side.

The diff skid was brand new and completely black when we started the trail.  Still, there isn’t a ding in that thing.  I’ll be using 1/4″ for all my armor, thanks.

The tank skid and rear bumper got some abuse…  I’m not happy that it happened.  I do like to floss a clean whip, but this will all be removed or replaced soon, so I’m not gonna cry about it.  It still functions. 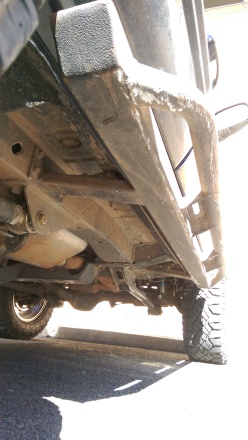 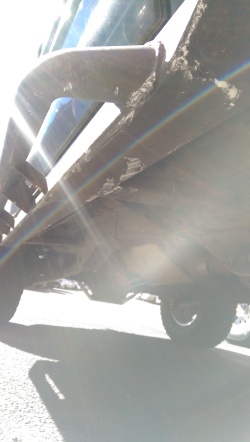 These sliders are just amazing.  I love them.  From JCR Offroad, they have taken hits I was sure would set off the airbags, and just shrug everything off.  If the Titanic had these, that iceberg would have been turned into cocktail ice. 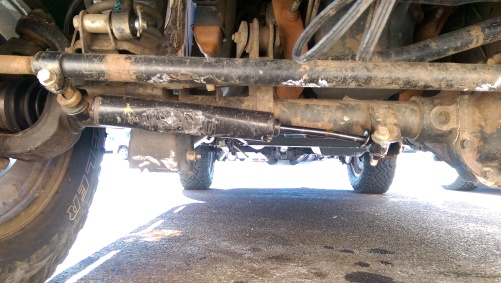 The stabilizer and the axle side bracket are trashed.  Tango Uniform.  Like I said, I’ve needed an excuse to move this bracket, so there that is…

If you ask me, I rate this trail as a 4 out of 5.  My Grand made it through on 32 inch tires, but it was a challenge, and it didn’t make it out unscathed, and wouldn’t have made it even halfway without ALL of the armor I have on it.  I’ve got gas tank (skid) damage, bumper damage, and several broken parts.

If you want to run this trail and get NO damage, I say you get some good experience, get an even better spotter, and have no less than 35 inch tires.  Lockers aren’t necessary for this trail.  We proved that three times over on Saturday.  If you don’t mind a few scratches, well, it can be done on small tires, but it ain’t easy.

Brutal Canyon?  That’s another story altogether.  If you can make it out there…