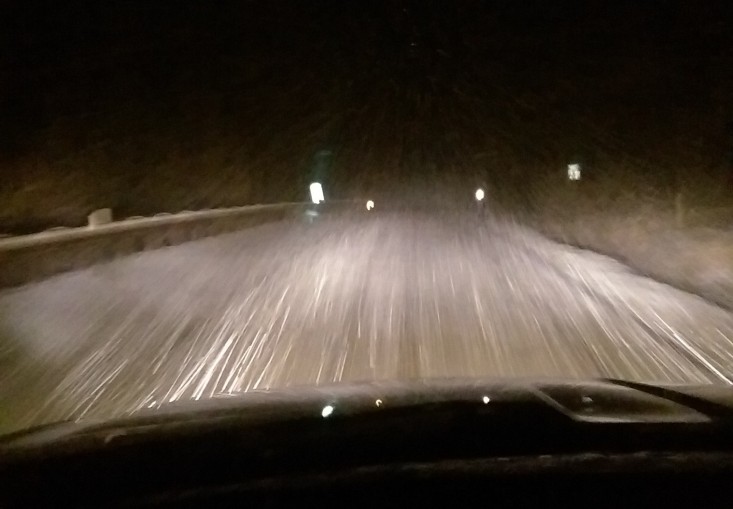 I’ve been busy over Christmas.  Other than just “Christmas busy” too.  I’ve done some work to the Jeep, including some work on the shocks, cooling system, and the suspension, and even a couple updates on some old stuff too.  Also, I watched Guardians of the Galaxy like, 8 times.  Finally, we finally got our first snow of the season, finally. Had to get out in that, even if it was just for a drive.

About a year ago, I bought some JKS bar pin eliminators to add just a bit more downtravel to the front axle.  I finally got around to putting those on, and as I excitedly showed a buddy the mod, he asked me, “So, you got like half an inch more travel?”.  Well, the thing is, it’s that, but it’s also having the ability to use the simple and strong loop design at both ends of the shock.  Ultimately, I’ll be putting the same type of contraption at the top, to somehow make things easier for me later on.  This will allow me to run the Bilstein 5125 instead of the 5100, but more on that later. 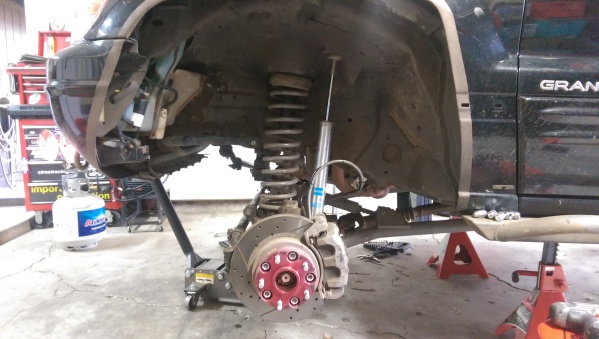 Behold the image above, where you can’t see any of the work I did!

While I was digging through my “Install Later” storage crate finding the bar pin eliminators, I also found a block heater that I had picked up long, long ago, and simply forgotten. 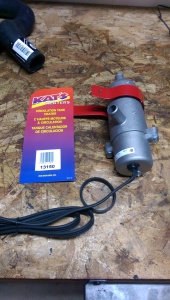 Well, conveniently, I have been developing a small leak from the thermostat housing on the Jeep, so I figured I’d knock it out all at once.

I installed new upper and lower radiator hoses, new thermostat, new gasket, and the block heater.  One problem I ran into (halfway through the job of course.  That would make a good post topic for the Lab…), was that I needed a tee to splice into the radiator hose for this block heater thing.  The only place that’s available is from the heater manufacturer, so I didn’t exactly get to finish that.  I closed up the cooling system with all the new parts (sans heater) and got the tee on order.  So that’ll actually be a thing.

I also rebuilt the flex joints on the front control arms.  This is actually a pretty big deal because the lift kit that I bought gets a bunch of shit that I don’t really feel it deserves, and now I have some actual evidence to back up my argument.  Alas, I plan to write a whole post about that topic, so I’ll save my soapbox for then.  I’ve mentioned it here, because I also stretched the front axle out a bit when I rebuilt the flex joints.  This means that there are all sorts of new opportunities for new contact when the axle starts to flex.  Here’s what I mean:

And the rest?  Well, I picked up two more 1-gallon air tanks to plumb into the onboard air system, but as things seem to be going right now, I’m waiting on a part that somehow got lost in the mail.  The 4 link for the rear axle is imminent, I just need to order parts and start welding.  Look for a build post soon (who am I kidding? soon? someday.)  I have a couple more days off, so maybe I’ll catch up on all the build posts and links I’ve been promising for months too.  Yeah, I’m going to do that.  Seriously.  Really!